A solar PV project owned by Cubico Sustainable Investments (Cubico) and Colombian utility Celsia has been inaugurated by the President and Energy Minister of Colombia.

Iván Duque, President of Colombia, said: “This is a tremendous privately developed initiative with public support in the form of tax exemptions and other investment promotion incentives.

Diego Mesa, Energy Minister of Colombia, added: “The country is progressing steadily through the energy transition with the incorporation of wind and solar energy.

“Projects like this new solar farm from Celsia and Cubico demonstrate that the policy implemented by President Iván Duque’s government has attracted investments that will allow us to keep expanding the installed capacity from these kinds of sources.” 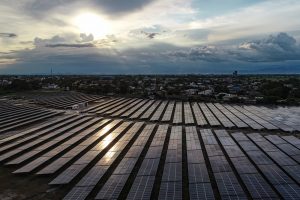 The Espinal project is part of the solar PV platform with a target capacity of 650 MW being created in Colombia by Cubico, a leader and global investor in renewable energy, in partnership with Celsia. As things currently stand, the platform will be the largest in the country when completed.

Through this partnership, Cubico and Celsia also own Caoba Inversiones, a transmission line platform in Colombia comprising around 1,500 km of transmission lines and 85 substations in Tolima and the Caribe region.

“It was an incredible honour to have the President and Energy Minister of Colombia join our team to officially inaugurate the Espinal project,” commented Ricardo Díaz, Head of Americas at Cubico.

He added: “As a global renewable energy company with plans to develop and expand our portfolio in Colombia, both in generation and transmission, we are very pleased to know that our sector has the support of the most senior members of the country’s government.”

Ricardo Sierra, leader at Celsia, noted: “We started to work in Tolima seventeen months ago and we have built the first solar project here with the support of our partner Cubico Sustainable Investments.

“Working together we are planning to generate an additional 650 MW of solar energy within the next year.”

Representatives from Colombia’s government, Cubico and Celsia came together to celebrate the Espinal project becoming operational.

Cubico Sustainable Investments acquires over 100 MW of wind in Uruguay