According to the latest UK government statistics, over four million people – or 6% of the population – are living in food poverty, a number which is expected to increase during winter as the cost of living crisis continues.

This issue was highlighted last week by The Trussell Trust, a charity and NGO aiming to end the need for food banks in the UK, which announced that it has supported a record number of users this year.

The charity provided 1.3 million parcels to food banks across the UK between April and September, with 320,000 people turning to this service for the first time.

In response to this crisis, alongside GLIL Infrastructure, its UK operational portfolio partner, Cubico Sustainable Investments (Cubico) donated more than £100,000 to 11 food banks local to its wind and solar projects during the same period.

The donations allowed each food bank to invest in the goods and tools which would most significantly benefit their services. 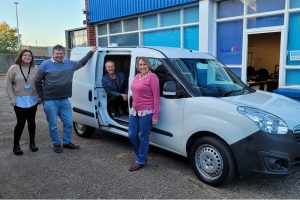 Haverhill Foodbank near the Broxted solar farm in Suffolk put the funds towards extending its service for the benefit of users who are less able to travel.

Henry Wilson, CEO of Reach Community Projects, an independent charity which works closely with Haverhill Foodbank, said: “Thanks to the generosity of Cubico and GLIL, Haverhill Foodbank have just purchased their new van.

“This is going to make a massive difference in how they are able to serve the community in which they operate, particularly as more people are needing more help.”

Elsewhere, Basingstoke Foodbank, local to the Overton solar farm in Hampshire, decided to use the money to start purchasing more fresh, locally sourced fruit and vegetables. This has allowed the food bank to offer its clients healthier and more nutritious options, while supporting the local economy.

“This generous donation will go a long way in allowing us to provide the help and support to the families across the Basingstoke and Deane area that need it most,” said Graham Sherwood from Basingstoke Foodbank.

For Cubico, the challenge of tackling food poverty and eradicating the need for food banks in the UK is an ongoing commitment.

The company has plans in place to organise similar initiatives, as well as volunteering days at food banks, over the next year.

This will not only give employees the opportunity to make a personal contribution to the fight against food poverty but will also allow Cubico to continue working closely with its local communities to tackle their biggest issues.